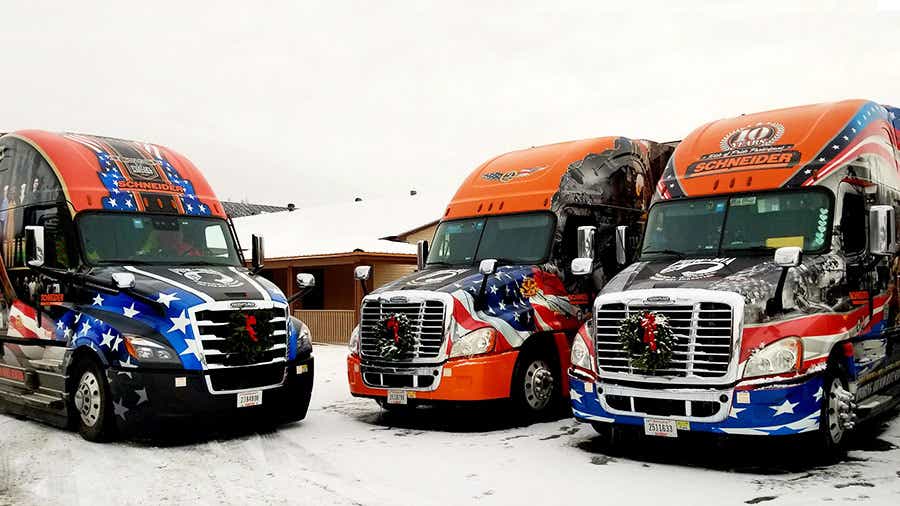 GREEN BAY, Wisconsin (December 17, 2021) An Army veteran deployed to two tours in Iraq and Schneider professional driver Jon Ritscher is one of a select group of drivers hauling balsam fir wreaths from Worcester Wreath Company in Columbia Falls, Maine, to Arlington National Cemetery as part of Wreaths Across America (WAA). "The honor of bringing the wreaths to Arlington is something I hold close to my heart," said Ritscher.

The annual event, which started in 1992, lays wreaths at the graves of fallen servicemen and women at over 2,100 cemeteries or locations across the country and abroad leading up to National Wreath Day on December 18. Schneider (NYSE: SNDR), a premier provider of transportation and logistics services, has participated in the wreath delivery almost since the program began. This year, about six Schneider drivers have the honor and privilege of carrying wreaths to locations around the United States.

"The pride Schneider shows veterans is unmatched," said Ritscher. "I'm grateful that I work for a company that shows this much respect for the veterans of the military."

Since 2016, he has been behind the wheel of a Schneider Ride of Pride, a specially designed truck that serves as a rolling tribute to military members. That year, Ritscher hauled wreaths to Arlington National Cemetery.

"When I pulled up to the gate for the first time, it was humbling. You feel the honor and the respect for all those veterans who served and didn't make it home or passed away," said Ritscher.

He has continued to participate in WAA each year since carrying wreaths on behalf of Schneider to Sarasota National Cemetery in Florida. This year, Ritscher and his truck are returning to Arlington – a journey made even more special knowing his Ride of Pride is being retired from the fleet soon. "It warmed my heart that I'd be able to experience this one more time," said Ritscher.

Like Ritscher, Schneider believes it's important to honor those who fought for our country, which is why the company dedicates drivers to the noble cause of hauling wreaths each year. "We need to continue their memory," he said.

Learn more about Schneider's efforts supporting members of the military.